Extract from 'The Normal State of Mind' (Parthian)


Two women from Diamond Harbour district of twenty-four Parganas have committed suicide after their ‘marriage’ is shunned by families. 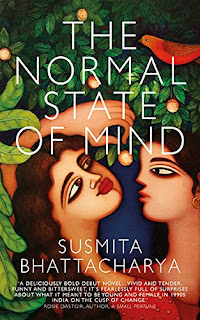 Moushumi stared at the television news reporter. He was standing among a crowd of villagers, shouting out the report over their chanting. The camera then zoomed on the faces of the two women’s mothers. They were wailing and beating their breasts, claiming their daughters were innocent. They had been victims of black magic. There was an inset, a rather dated photograph of the deceased, then probably in their teens, with ribbons in their hair and toothy grins.


The lovers, both from farming communities, had grown up together in their tiny village near Falta. They had secretly married each other, when their parents started looking for prospective bridegrooms, by exchanging garlands and promises in a Shiva temple. When one of the women’s fathers went ahead with wedding preparations, the two came out and confronted their parents. They were then beaten by the families. A tantric was summoned to drive away the spirits that had possessed them to take such action. An ojha was performed and one of the women was forcefully married off to an old man. Her lover immolated herself at the time of the wedding. Hearing this tragedy, the other woman escaped from her husband’s home and drowned herself in the river. She left a note for her family saying that if the two had been allowed to live together, they’d all be happy and alive.


The reporter looked straight at the camera as he finished his report. Moushumi looked away. She realised she had been so caught up with listening to the news, she hadn’t noticed her father had been watching as well. ‘Sensationalism,’ he exclaimed from behind her. ‘They will report anything in the media nowadays to get attention.’


Moushumi looked up. ‘But Baba, surely must be something genuine to report this, or why would they? They were very brave to face the world.’ She watched him for his reaction.


He sniffed and reached for his cup of tea.


‘Ma, did you hear about this?’ Her mother was juggling a spatula and a spoon while stirring the dal and frying the fish. She wiped the sweat that ran down her neck and strained to hear above the splutter of the fish sizzling in the pan.


‘Utter rot,’ her father mumbled and opened the newspaper again. ‘What is the world coming to? Chee chee. Desperate village bumpkins. How can the TV news report such filth, I fail to recognise.’


Moushumi flinched, ashamed. She was indulging in something her father found filthy. ‘It’s quite normal in the Western society. It is becoming accepted there.’


Her father glared at her but said nothing. He turned to the sports page and cursed about Mohun Bagan losing again. He was clearly not interested in continuing on the topic. ‘What were you saying, Mou?’ her mother asked, joining them in the sitting room. The air was smoky with all the deep frying.


The smell of the fish had seeped stubbornly into the mattress on the divan and the cushions and the curtains. But it was a comforting smell, not the artificial rose and lily room freshener that Moushumi had to adjust to on Saturdays in Jasmine’s flat.


Her father left the room and Moushumi decided that she could still try out her mother. ‘Two women committed suicide because their marriage was not accepted in society.’


‘Did they marry Muslims or what?’


Her mother stopped tidying the cushions and stared at her.


‘They said they loved each other.’


‘But how will they have children? Who will look after them?’


Moushumi felt better. At least she was curious and asking questions. At least her first reaction was not that they were filthy. ‘Does that matter? They loved each other.’


‘What fools,’ her mother replied. ‘They’ve ruined their families’ reputations. I hope they haven’t left behind any unmarried sisters, or that will be the end of the road for them.’


‘You think so?’ Her mother busied herself with putting right the newspaper.


‘Stupid naive girls, did something under the influence of filmy romance, I suppose.’


Moushumi felt betrayed. Her mother was not on her side.


How could she ever tell them if the time came? Wiping her hands on the end of her sari, her mother said,


‘Anyway, I don’t have time for all this nonsense. I still have to finish cooking lunch. How would you like your fish? Mustard sauce or tomato?’

‘Silly girls,’ said Jasmine, grimacing at the newspaper-cutting Moushumi thrust into her hand. ‘No brains, these villager types.’


The news of the two women had found a little space in the local newspaper. Moushumi had cut it out and kept it in her handbag. She wasn’t sure whether this was to remind her that this sort of thing was not accepted, or to reassure her that this was not her fate, yet. She had hoped that Jasmine would take up their case, get angry, and promise her that such things didn’t happen in big cities. Instead, Jasmine had just laughed about the whole situation. ‘You too, Jazz? Don’t you believe in their love? Wouldn’t you have backed them up?’


‘For what, Mou? Be sensible. You are living in a fantasy world.’ Jasmine switched on the television. The theme song of The Bold and the Beautiful filled the room. She tucked the sheet under her chin and watched idly.


‘But it is accepted in the West,’ argued Moushumi.


‘Then go and live in the West. Find yourself a lover there and make a home for yourselves. Don’t keep harping on about it and spoil my mood.’


‘But we are lovers, Jasmine.’ Moushumi shot back. ‘Like those two girls. We do the same thing, and yet you reject their bravery in wanting to live together?’


Jasmine increased the volume of the television. The air-conditioning started to whir noisily, adding to Moushumi’s distress. She wanted to shut everything off and shake Jasmine hard. Make her listen to her. Answer her questions.


‘We can’t live together, surely you know that? Or go public,’ Jasmine said finally, during a commercial break.


Moushumi nodded. She was not stupid to have such hopes.


‘Then why the entire headache?’ Jasmine asked her. ‘You will eventually have to get a man to marry you and then we could continue meeting.’


‘But, I don’t want it like that,’ Moushumi said. ‘I want to have a truthful relationship.’


‘A truthful relationship? Which world are you in, madam? Just enjoy yourself and stop complaining. You’re lucky with what you’re getting.’


There was truth in every word of what Jasmine had said.


How could they have an open relationship? What name would they give it? Moushumi thought of those two village girls. Did this kind of love mean being confined in a bedroom, once a week, having sex?


She realised she was lucky that Jasmine had another flat for them to hide in, to indulge themselves in.


What about the rest of them? Where did they go? What did they do?


‘It’s useless, Jasmine. This whole thing is a waste of time.’


Moushumi slid under the sheets and held Jasmine’s hand.


Jasmine turned around and stared at Moushumi for a long time. Her gaze softened, and when the commercial break ended, she didn’t turn back to the television. ‘I’m so glad you do come, darling. So don’t spoil things with miserable realities. Okay, let’s get out of this place. You’ll have to tell your parents a very big lie, mind.’


Moushumi nodded. At that moment, she didn’t care very much. She would do anything for Jasmine. She clung to her, trembling, waiting for Jasmine to touch her. Soothe her nerves. They kissed quietly, and Jasmine stroked her hair, murmuring into her ear. Moushumi calmed down.