Readings and Festivals in the June sunshine

Glorious June! Sunshine, and more of it. When I was invited to read at the Tagore Festival, under the trees, I stayed glued to the weather reports every chance I could. Would it? Wouldn't it? It was like hoping to win the lottery.

The sun came and smiled, and baked us nice and brown. And so my two readings went off well, not an umbrella in sight. Only sunshine and smiles! 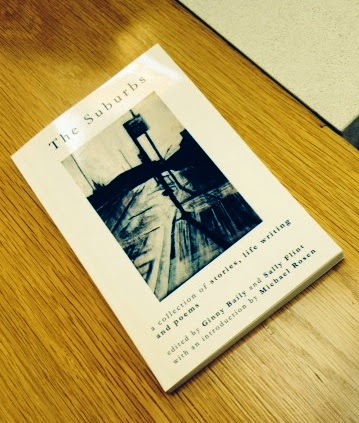 But first, on Friday afternoon, I made my way to Exeter, for the launch of Riptide's latest issue. When the editors, Sally and Ginny, accepted my first life writing piece, I just had to attend! My piece, called The 6.13 Ladies Special, is an essay about the local trains of Mumbai. This special edition of Riptide was linked in with the work of the Leverhulme Trust-funded Cultures of the Suburbs International Research Network and coincided with the Network’s 2014 conference, also on the theme of Imagining the Suburbs,  held at the University of Exeter, UK, in June. More examples of the virtual exhibitions of this project can be found here: Cultures of the Suburbs.

The forward written by Michael Rosen describes the issue as "Riptide Volume 10 – The Suburbs – is a collection of stories, life-writing and poetry exploring suburbia in all its manifestations. In his foreword Michael Rosen, who confesses to having suffered from ‘suburbophobia’ in his teenage years, says that ‘these fascinating stories and poems show a diversity that resists’ the picture of the suburbs as “one culture, one class, one type of house’.

Copies can be purchased directly from the website: http://www.riptidejournal.co.uk/

We had a lovely time at the launch. There was live music, wine and nibbles, and of course meeting Ginny and Sally, and other contributors to the issue was the highlight of the evening. 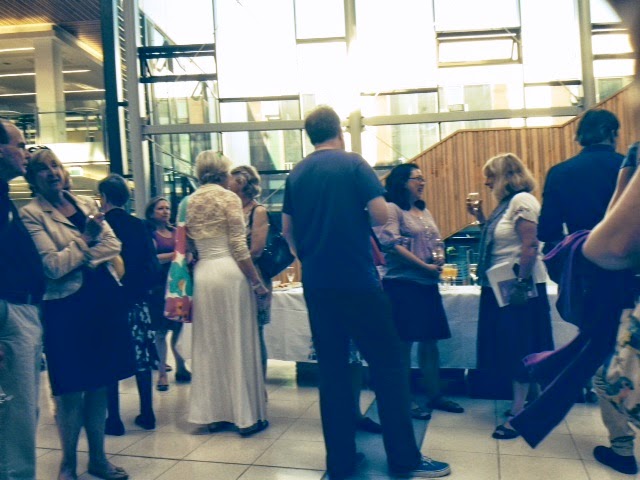 "Some of the authors are new, some will be familiar names. The stories themselves are by turns witty; subversive; thought-provoking; disturbing – but always well-written, and always sincere. I hope you’ll enjoy them as much as I did. And I hope that you will revisit them, as I often do with short stories, whenever you need a change of perspective, a glimpse into another world, or just a quick fix of something new. The next ten minutes could change your world. Indulge yourself – jump in!"—Joanne Harris 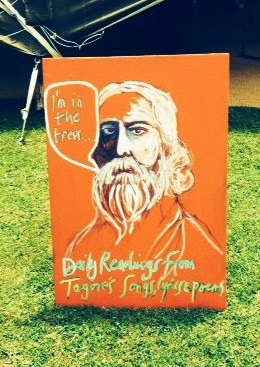 The next day I was off to the Tagore Festival. This was a truly special event, because I was here representing my culture, my history and the feeling of connecting with Gurudeb Rabindranath Tagore through this festival was indescribable. As we walked through the arched gateway into the estate, I saw the sarod maestro Amjad Ali Khan sitting in a bower, chatting to a young admirer I'm sure. I've heard him play many times in India, but to see him casually sipping tea in an English garden wasn't something I had imagined I'd see! There was a great line-up of events, ranging from music, dance workshops, arts and crafts for children, stalls and food, of course, the Great Indian Curry Fest! Needless to say, we indulged ourselves to the maximum. Pakoras, cutlets, pani puris, channa curry, chicken curry...

Oh, coming back to my readings (I always get carried away where food is concerned), I read 2 short stories dealing with home, displacement, identity and perspectives. One was Letters Home, published in Rarebit: New Welsh Fiction.  It  is a story about a young Bangladeshi man who comes to Cardiff to find a better future for his pregnant wife and himself. It is written in form of letters to his wife, describing his experiences in a new country. I was rather nervous reading this to the audience, as who should be standing right opposite me than the Bangladesh High Commissioner, Mohamed Mijarul Quayes. But he was very appreciative and kind, and a very interesting man to speak to.

The second story was Growing Tomatoes. You can hear a podcast of this story at LiteratureWorks. This is a story about a young Somali bride, second wife to her husband, brought to his home solely to produce a male heir. This is also set in Cardiff, and it follows Hoda's life and her attempts at trying to understand her purpose of life and how to love and respect herself first.

The team from a Totnes local radio station, Soundart Radio 102.5 FM recorded excerpts of my stories to go live on radio!
It was all very exciting:  meeting other artistes and sharing stories, two large helpings of Langage Farm's lemon drizzle ice-cream to keep the heat at bay and making new friends.

A big hug to my dear friend, Stephanie, who suggested the idea of reading at the festival and arranged for things to happen. Thanks to Jude and Sophie, organisers of the festival for having me. And a huge special thanks to my family and friends who came along to support me.

My three year old couldn't understand why I was reading a story to an elephant under a tree. Is there any good reason why I shouldn't have? The elephant was most attentive, she stayed riveted to the spot.