In the Laboratory of Flash by Calum Kerr

As a big fan of flash fiction, I'd like to share Calum's thoughts on it. He's a writer, editor and director of National Flash Fiction Day in the UK. He's recently brought out a new collection of flash fiction, Lost Property, so without further delay, over to Calum:

When coming to write this post, Susmita asked me to talk about flash-fiction as a site for experimenting with fantastical fiction. She cited my work along with Adam Marek’s Instruction Manual for Swallowing and some of Tania Hershman’s stories in My Mother Was An Upright Piano.
I have already attempted to unpick the possibilities for writing genre fiction in flash in earlier posts (http://nettiethomson.com/guest-writers/hello-darkness-my-old-friend-a-guest-post-from-calum-kerr and http://sjihollidayblog.wordpress.com/2013/07/03/imagination-overload/) but what struck me in Susmita’s question was the word ‘experiment’ as I think that is a crucial word when it comes to flash-fiction.
Now, I don’t wish to dodge the ‘fantastical’ part of the question, but I do think there is a broader point. Flash-fiction is short. This is something we already know. But the crucial thing with writing to the length of a flash-fiction as opposed to a novel, or even the few thousand words of a short story, is that you can try something new – be it a genre, a style, a perspective, whatever – and if it doesn’t work, then you can try again or you can abandon the attempt.
The result of this, I find, is that flash-fiction is rapidly becoming the site of the some of the most interesting experimentation going on in prose writing today.
I recently edited, with Holly Howitt, entries for the latest National Flash-Fiction Day anthology, Scraps (http://nationalflashfictionday.co.uk/anthology.html) and was very pleased with the stories we picked, feeling they were diverse and representative of the best writing in flash-fiction at the moment. However, I was surprised and intrigued when a lot of the responses to the collection were comments on how experimental the work in the book was. This sent me back to look at the stories again. Sure enough, we have a one word story, a fake entry from a fake medical dictionary, a stream of consciousness description of the thoughts in a football-fan’s mind during match, pieces with no capitals or punctuation, an interview consisting of answers with no questions, the beginning of a fake screenplay, pieces entirely in dialogue, horror stories, crime stories, science-fiction and fantasy stories, surrealism and what can only be described as ‘just’ stories. It is a complete riot of different approaches.
But what struck me, once I looked back at this collection, was that I had not noticed the level of experimentation that was occurring. These just seemed to me to be the things that are happening in flash-fiction at the moment, and reflect techniques which I myself have used, wish I had used, or now plan to use. It seems, increasingly, to be what the form is for.
Because it is a form of fiction which makes great use of implication, relying on the reader to unpick what they are presented with and extrapolate the rest of the story, this means that the story itself can be presented in a huge variety of forms, borrowing from all existing forms of writing and inventing a few new ones too.
At times, of course, this experimentation will expand out into the realms of the fantastical, but it is just as likely to tackle a love story, or coping with loss, or action and adventure.
Flash-fiction is a relatively new form, at least under its currently growing list of definitions, and people are still testing the boundaries of what can be done with it. They haven’t found the edges yet, and I wonder if they ever will.

To give you an example of the kind of thing I mean, here is one of my stories, which seems perfectly normal to me, but might well be described as ‘experimental’.

*Taken from Steven Briers’ monograph, The World in the Twenty First Century (Bitterne University Press, 1978). Though, to be honest, it’s all a bit like that Tomorrow’s World, isn’t it? I mean, they were predicting protein pills and jetpacks, weren’t they? Not once did they say we’d all have smart phones and tiny skinny tellys and no money. It’s a hilarious book, you really ought to read it. If you can find it, that is. I couldn’t find it in the library, and inter-library loans were no use. I mean, who do you have to sleep with to get one of those? I’m serious. You tell me who exactly it is who needs that particular blowjob and I’ll be on my knees with my mouth gaped in a heartbeat. I tried getting it from Amazon. No joy. Ebay: similar. In the end I tracked it down in a book warehouse which smelt worse than the Vice Chancellor’s armpit juice. But, no, it’s really funny. He makes all these predictions about the economy, and they’re all based on unions and the three day week. To him, Thatcher was just a funny woman who liked ice cream. He knew nothing. But he had one useful quote, and I stuck it in here because my supervisor told me I should consult the book, and she probably hasn’t read it since it was published. She looks back, through gin-tinted glasses, to a time when she was thrusting and energetic and studying everything she could find, then going out on the beers and having a knee-trembler round the back of the union. It’s all tied up in her mind: dirty, panting,  back-alley orgasms and Steven Briers’ masterpiece. Still, if it gets me through this bloody thesis, that’s good enough for me. So, yeah, this was taken from a 40 year old book by a man writing about his future – our present – who managed to get almost everything exactly wrong. And yet, here it is. Welcome to bloody academia. Where’s my jetpack? 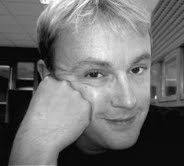 Calum Kerr is a writer, editor, lecturer and director of National Flash-Fiction Day in the UK. He lives in Southampton with his wife –  the writer, Kath Kerr –  their son and a menagerie of animals. His new collection of flash-fictions, Lost Property, is now available from Amazon, or direct from the publisher, Cinder House.
Posted by Susmita at 06:58