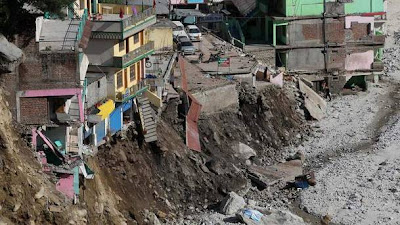 It's the sound that wakes her. Not the drumming on her tin roof. Not the wind crashing through the broken window. Not the rush of the water overflowing down the hill. It is the sound of her children being swept away, in front of her eyes. Disappearing in an angry froth of mud and slime and rubble. There is no sound. They don’t cry or weep or shout. They were asleep, huddled together to keep warm. They went in their sleep, she thinks. They’ve gone down the slope, hurtling down the landslide. She looks around her, breathless. Her house, her shack of tin and tarpaulin is stripped and she stands in the open, water running down her neck and hair, stinging her eyes, choking her voice. They are gone. She can hear wails and screams. She is not alone. Her eyes scan this raging river. More rubble, tarpaulin, a broken chair, a television set, pots, pans, an iron bed. They follow her children, down the slope of the hill, into nothingness. In the morning, she will see where she stands. A lonely figure, still breathing, hands bleeding from digging. Voice lost from screaming. At the bottom of the hill is a heap. In it there are children, houses, their lives. The mothers dig. The fathers dig. They always knew the hill isn’t safe. Every year it is the same story. Only this year, it is of this scale. They fish out pots and pans and throw them aside in disgust. She finds an arm. A frail arm with a black bangle on it. She cannot pull out the rest. She doesn’t want to see. She doesn’t want to know.
Posted by Susmita at 08:22