Review of Word on the Street: a novel by Romy Wood

WORD ON THE STREET, a darkly comic reflection on homelessness, life writing and dermatology.

I love a good, darkly comic book, so when I got Word on the Street by Romy Wood, I knew I was in good hands. It is a difficult subject to read, the premise is grim. It makes one feel guilty for ignoring the homeless
man shuffling on the street, pulling his mangy dog behind him. But the way Wood handles the theme; it makes the reader warm up to the strange mix of characters, their madness and their scheming ways. It makes the reader want to take Shona, the main character, by her shoulders and shake her hard.

There are a few memorable characters, such as Colin, who’s dog is dead but still lying in his doggy bed days after rigor mortis has set in. There’s utterly hairless Paul, with not a hair to his name, who does a runner from the quarantined shelter and is let loose into the city. Ffleur, beautiful sophisticated Ffleur, who is perhaps pretending to be homeless. What is her secret? And why is she latching on to Shona? Nain, Shona’s hypochondriac grandmother, who lives on tinned food and has a year’s supply of bleach in her cupboard. Shona’s mother, who did a runner herself and has a now-I-hate-you-now-I-don’t relationship with her family. And above all, Dan, Shona’s love, the journalist who wants to save the world from this pestilence that’s about to destroy everybody.

The story moves back and forth from the days of the quarantine and its aftermath to Shona’s time in a  prison hospital. The spread of the disease and the race to find its cure is swept up into a frenzy by the media and politicians use it as a ploy to gain votes.

We follow Shona as she struggles to face the true nature of the world. When faced with a calamity, true colours of people are usually revealed. We learn about her mental state and its destined path to self-destruction. We support her love for Dan and for her blind faith in him. But is it enough to make the world alright again? 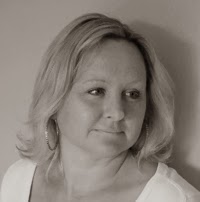 Romy’s experience as a recovering bipolar person brings authenticity into the world of Shona and her actions and reactions. Her language is precise and self-deprecating, bringing to life the comic moments of politicians putting their foot in the mouth and the power of money talking. Cardiff, as the suffering city, is bleak and unsure. Bad things happen in the dark, afraid to show up the dirty facts in broad daylight.  This is a social commentary of the way things are, the society we live in. After reading it, will you ever look at a homeless person as part of the brickwork of the wall he shelters against?

It is a story of homelessness and disease. Of suspicion and vice. Of greed and selfishness. Politics. Medicine. Mental illness. And above all, love.

Word on the Street is available from most online retailers and selected bookstores.
Posted by Susmita at 05:45