The Year of Flashbacks 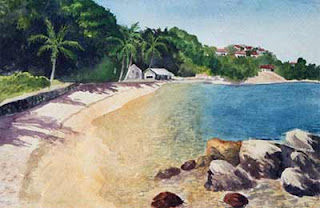 Mariella stared at the crashing breakers. The sea was grey, dark clouds loomed low, threatening to swallow the earth. Fishing boats bobbed carelessly in the distance. Why were they even out there, she wondered. But she knew why. They needed to provide food on the table, the weather was irrelevant to them.

Hugging her shawl closer to her, Mariella trudged back to her cottage. Smells of frying fish and toddy accosted her hungry mind even as she tried to ignore the pleas. There was a flurry of activity along the shore. Christmas bunting hung on the eaves of cafes and restaurants lining the beach. Fairy lights circled the palm trees. People dressed in bright colours, laughed and greeted one another as they made their way to church. Mariella looked away. She didn’t want to see the joy in those faces. The celebrations. The prayers. She wanted none of that. All she wanted was a glass of whiskey, ice tinkling, warming up her soul, numbing her mind.

She was here to punish herself. It could have been one of merriment if she had listened. But of course, she had got her way and now it was for her to repent forever. She thought of her family back home. The thick warm air inside her mother’s house. The smell of mince pies and turkey. Big soft cushions to sink into while listening to Christmas carols. The tree blinking constantly in your face. Cheeks hurting from keeping the smile intact. Fingers aching from all the wrapping of parcels. Bank balance depleted. But still, a hope for a better new year.

There wasn’t a new year for him. It ended a day after Christmas. It angered her that he left her; there was so much to be said and done. Like their wedding. The honeymoon to Goa. The children to come after that. Their growing old together. He didn’t keep his side of the bargain, made a hasty exit. And she made her way to the other side of the world, this Christmas, for him. Wasn’t he always inside her soul? Isn’t that why she always poured that second glass before she realised. But she couldn’t throw it away. It would stay on the table, resolute and demanding. Its honey eyes scorching into her, until she reached out to gulp its contents and slam the glass down.

The church bells were ringing outside. The wind whistled through the window and she hoped the fisherman would be home soon. Safe, surrounded by the warmth of goodwill and toddy. Her legs wanted her to walk out into the open, go to the church, and celebrate with the worshippers. But her mind screeched in revolt. Celebrate what? A loss of life, two lives, for where did she stand now? She sank deeper into the cane chair, momentarily missing her mother’s soft cushions, their banter, their company.

A voice came through the darkness. A child singing. So sweet, so pure. A hymn that floated easily on the currents of the wind, far into the sea. Towards the fisherman fighting against the waves, the voice pulled them, safely towards the shore.
Posted by Susmita at 05:11