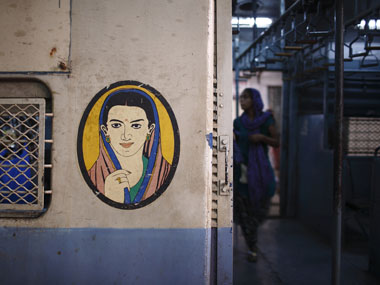 The 6:13 Ladies’ Special creates a phenomenon of biblical origins on the suburban train stations of Mumbai: the parting of the Red Sea. As soon as the announcement crackles over the noise and clamour of commuters waiting to return home, there are two distinctly opposite reactions. An audible grunt of impatience from the men, who have to move backwards, grudging the minutes lost in the rush back home. And a sigh of relief from the women, who triumphantly step up to the front. The Ladies Special glides in, and with a cacophony of screams and shouts to match no other, a surge of women sweep on board. This is the daily commute for most middle-class people living and working in Mumbai.

As the city progressed from a tiny fishing village to a flourishing city, more and more people streamed in from different parts of India to make their fortunes. The British built the railways, and in 1870, the Churchgate Station opened. Mumbai, then Bombay grew in a linear fashion, stretching along the western coast of India. And the need for the tracks to go further into the suburbs created the 153 km long railway that ferried people from one end to the city to the other. 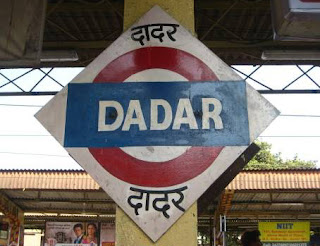 I was fortunate that in 1991, the world’s first ladies only train was introduced. I had just started college, and having to negotiate the rush hour journey across town was quite an initiation into independence. In time I too became a toughened old hand, adept at jumping in and out of running trains every day. Two torn ligaments, results of falling off running trains are the only proof of my struggle in my daily commute.

In time I got a job and that placed me right in the heart of the business quarter of Mumbai: Nariman Point. My office was near the seafront though I never did get to see it through the darkly tinted windows of my workplace. Funny how in order to keep the sun out of sight, we also had one of Mumbai’s most beautiful sceneries obscured from view as well. At lunchtime, my colleagues and I often took a stroll on the Marine Drive promenade. The sun baked our heads and scorched our skins the colour of chocolate. But a breath of fresh sea air was essential after being cocooned in a stale air-conditioned environment for hours. At the end of the day, most people, tired and impatient to return home, hurry along to the station. In fact, an aerial view of Churchgate station, golden domed in the setting sun, could easily pass for a hive, with people swarming towards it like bees. 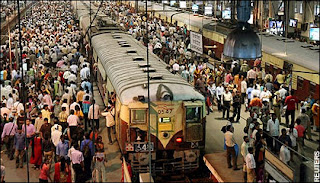 As it’s best not to mess with bees, it’s not a good idea to stand in the way of the thousands of commuters already highly stressed about their journeys back home. It takes an hour and twenty five minutes on a fast train from Churchgate to the then farthest point on the Western Line, Virar. That’s about 84 kilometres. The suburbs have now extended beyond Virar, adding eight more stations to the Western Line, an extra sixty-nine kilometres of track.

But that’s only the physical distance from one point to another. It takes a hardened commuter a lot of will-power, die hard attitude and the willingness for repeated self-torture to be a regular passenger on these local trains.

There are rules. And one must always obey them, or the result could be disastrous. One should never travel on a Virar Fast, which stops at selected intermediate stations, to go to a destination that could be reached on a slow train, which stops at each and every one. If you manage to even inch towards the exit (the phrase ‘packed like sardines’ fits perfectly; as nearly five thousand commuters crush themselves into carriages meant to carry only eighteen hundred), you will be showered with abuses, poked with vicious elbows and I have even heard that safety-pins have found their uses in commuter train battles. 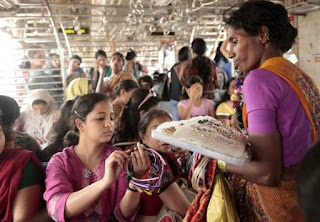 Hair-sprayed office PAs gnash teeth and grind their bodies against salwar-kameez clad shop assistants. Fisherwomen returning home from the markets hold their stinking, fish water dripping baskets in front of them as armour. Tight jeaned college girls tap giggle flirtatiously to their boyfriends on their phones while digging their well manicured nails into an unsuspecting victim. Beggars sing for their dinner. Hawkers push their plastic wares into sweating faces and banter for a sale. Train friends swap tales and snacks, or play cards if lucky to be sitting down. The technical term, ‘super-dense crushload’ is completely justified here.

As the stations fly by, more and more women pack themselves into the train. The Ladies Special is a haven: an entire train to the women. No pinching fingers or heavy breathing to fear. No sexual innuendos or badly sung Bollywood songs to endure. In spite of the constant battle for space, it is still our battle. We womenfolk fight our own corners and sort out our own problems. After Bandra, the crowd starts to thin a bit. There’s still half the journey left. But at least by now, there may be place to sit. There’s an opportunity to breathe deeply and relax. To smile at the person opposite. To take the vegetables that one has hurriedly haggled and bought outside the station out of the bags and then begin to chop them one by one. There’s never any time to be wasted. As a woman in the metropolis, one is always thinking ahead. There are hungry mouths to feed at home, and no time to cook. Simple solutions like cleaning and preparing the vegetables for meals begin in the train. Women gossip and get ahead of their housework. A seamstress takes orders for dresses she will make and supply on the train in a fortnight’s time. She measures her client, pins stuffed in her mouth, measuring tape flapping as they are jolted from side to side in the speeding train. 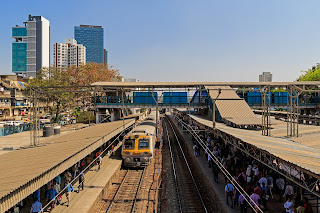 Statistics reveal that more than five hundred people die annually in train accidents. Many fall off moving trains, others hit a live wire if sitting on the roof and get electrocuted. There are incidents of stone-throwing by slum-dwellers at passengers and also of people hitting electric posts because they lean too far out of the door in order to get a foothold into the train. But there are other stories too: heroic acts of bravery, loves found and lost, and some that are too good to be true.

It was a normal weekday. I was returning home from a client meeting. The Ladies' Special was running late. I decided to wait for it, rather than battle it out in the general trains. I hung around in the background, eating roasted peanuts to pass the time. When the train finally approached, I braced myself to fight and elbow my way into the train. I was lucky to have a first class pass, and to my absolute delight, not many women approached my compartment. Elated by the ease of the commute, I entered the train. It struck me a bit strange to find women huddled on one side of the first class, leaving the other side empty. I turned towards the window seat and looked in horror around me. The women shouted, come away, come away. There was blood splattered on the seats and floor. I ran back to the populated side, aghast. It looked like a murder scene. But the women seemed very animated. They laughed and chattered, waving their arms and rolling their eyes in excitement. Of course, they were discussing the event that had taken place earlier on in the journey.

“Baby, baby,” one woman cried, waggling her head. She seemed like a proud grandparent. I stared at them, not sure what to believe. But it was true indeed. A woman had just given birth in the first class compartment of the Ladies' Special. The commuters described to me the scene with renewed excitement. How her waters suddenly broke after setting off from Churchgate. They pulled the chain at Bombay Central, but she was unable to move. Doctors rushed to the train, and with their help, the woman pushed out a healthy, six pound baby boy into the world. Unbelievable, I gasped. This could only happen in India! And no wonder the train had been late.

When we approached the next station, a man with a red plastic bucket and broom jumped into the train. He splashed water on the bloodied seats and floor, and swept with a maniacal force. We kept well back, shouting at him for sending sprays of that water towards us. A local train waits at each station for 30 seconds. In that time, he had washed and spread the blood and mess even further across the train, before jumping out again. We sighed and shook our heads. And then the high-pitched conversation resumed once more.

The next day, I was handed a laddoo by my fellow commuters. The woman and baby were safe and thriving in hospital. I stuffed the sweet into my mouth, joining in the celebration in the Ladies’ First Class. There was no sign of any birthing in the compartment. Probably it was a bit too clean, and that was a sign in itself. The train authorities had had no choice but to scrub down the compartment. We were the elite First Class passengers after all. We laughed and celebrated the baby’s birth with full gusto. We exchanged stories of births and trains and all things in between.

“This baby boy will probably be the one and only male ever to be welcomed into a Ladies' Special,” I joked.

“Yes,” the women chorused. “The only male to set foot on our train with our permission!”

Bless him, I thought. He’ll also be one lucky guy to get a lifetime’s pass to travel first class on a local suburban train in Mumbai. But not on a Ladies’ Special, we wouldn’t grant him that!